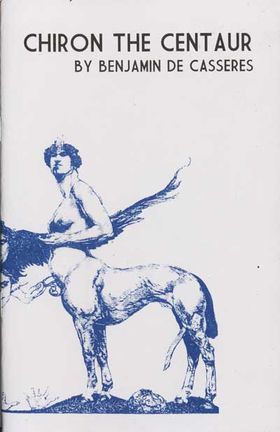 This essay by Benjamin de Casseres is "an imaginative fable, investigating the nature of civilization," positing an aging Chiron musing about his "scrap-wisdom."

In 1915, De Casseres published his first book, a collection of poetry titled The Shadow-Eater, to mixed reviews. Blanche_Shoemaker_Wagstaff called the volume "a welcome tribute to individualism and defiance" and the poems themselves "metaphysical meteors, searching, cataclysmic and rich in satire." A review in The New York Times favorably compared De Casseres to Walt Whitman, claiming "if his alien, highly individual genius remains unrecognized, criticism will lie upon the public, not upon him." Others, however, received it less favorably. Clement Wood, writing in the New York Call, mocked both De Casseres' book and Wagstaff's review, writing, "It must be admitted that Mr. De Casseres often uses good rhythms; what they are about is another thing. They are mainly about Nothing, as far as we can gather."

Of course, some people are more intrigued by Nothing than others... Anyway, Enemy Combatant calls de Casseres "a demonic magician of the pen," "the real deal," and that, in critiquing the gigantic fraud of civilization, he "refuses to use civilized English in a linear, logical way, and instead approaches the entire language as a vast and amusing game..."