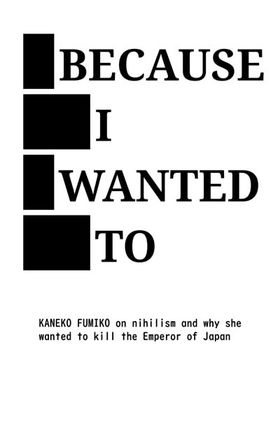 Kaneko Fumiko, on nihilism and why she wanted to kill the Emperor of Japan

Twenty eight pages, with two translations of her interrogations, a new original translation of her writing, and a brand new short introduction about her.

Kaneko Fumiko (1903-1926) was a Japanese anarchist living at the early part of the 20th century. Born out of wedlock into grinding poverty, she lived her life as an outsider within Japanese society including a stint with unloving and cruel relatives in then-occupied Korea, her experiences inspiring both her rebellion against authority and feelings of solidarity with others on the receiving end of society’s boot. Together with her friend, partner and, before her death, husband Pak Yol, she started underground anarchist societies, published
articles against the Japanese state and society, and, perhaps, planned to kill the Emperor Taisho and then-Crown Prince Hirohito with explosives at Hirohito’s wedding.

This woman should be much wider known.