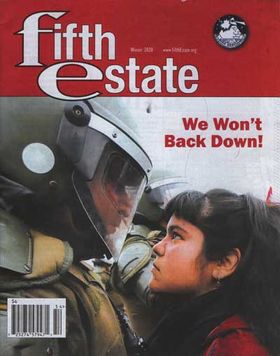 This issue of Fifth Estate includes The Logic of the Telescope, on native Hawai'ian struggles, reflections on "How we can get justice in an unjust system" inspired by various right-wing violence being acquitted or otherwise consequence-less, a museum on fighting and winning against gentrification, what the Gray Panthers have to offer anarchists, an anarcho-primitivist's ponderings on his 84th birthday, a John Zerzan piece on transhumanism, and so on. The bulk of the issue is reviews of books by AK Press and PM Press, including a brief take on a PM title called Parenting without God... for those who need such a thing