Cart is empty
Cart is empty
View cart
Checkout
Home/Pamphlets/For the Insurrection to Succeed, We Must First Destroy Ourselves 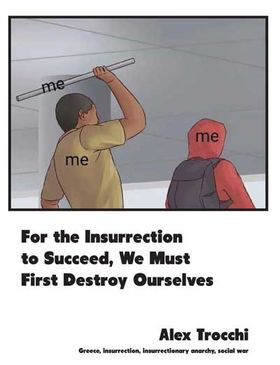 An essay by Alex Trocchi.

We are surrounded by the picturesque ruins of all explicitly political ideas: schools at which no one learns, families bereft of love, banks whose coffers are empty, armies that only lose wars and laws that are merely expressions of “anti-terrorist” paranoia. What does this mean for any kind of new politics—if “politics” is even a suitable word? This question must be answered because strangely enough, insurrection against the entire social order is increasingly the only option left on the
table. After all, everyone knows nothing works. To be realistic, a system in the midst of both global resource depletion and a global fall in the rate of profit could not possibly concede any sort of demand even if it was in its best interest to do so. In election after sorry election, people are throwing out their so-called representatives—¡Que se vayan todos!— yet they are not really voting for anyone, but they vote against politics itself using the only feeble expression of politics remaining to them, the ballot. The youth know better, as the absenteeism that increases in every election shows.