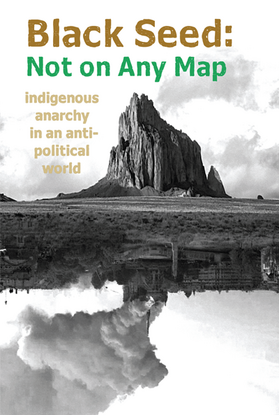 Indigenous Anarchy in an Anti-political World

The first of two collections from Black Seed, this one includes, as well, new material from Klee Benally (who also wrote an introduction, did the cover illustration, and assisted with editing), and two authors new to Black Seed, Mike Gouldhawke and Edxie.

Black Seed was becoming a voice in, and for, indigenous anarchism, from a perspective that is different from, and definitely in dialog with, more traditional indigeneity, and more traditional anarchist thinking. Urban, nihilist, green, brown, black, mixed, liminal, antipolitical, anti-anthropological, rejecting both the perspective that ancient peoples had all the answers and certainly that anyone now has... or even that all the answers would be possible or desirable.

The contributors to this volume express a troubling of both traditions, reflect on what it means to use names imposed from other places on ideas and practices that have existed forever, as well as the manipulation of definitions that claim to empower us but ultimately serve our enemies. The young label "indigenous anarchism" is already at risk of reification and subsumption in a political, academic, identitarian landscape that irons out everything spiky and relevant about it, and further invisibilizes the people who are featured here, and those who we hope to hear from in the future (you know who you are). So this volume is also to recognize the direction Black Seed was taking, and to say that those conversations are still happening, and we take a stand in that fight, to keep indigenous anarchy as something that is not containable by definitions, something not on any map.

The second collection, Where the Absence Is, will be selected writings that at least point to the range of the territory of the journal, as well as the (truncated) trajectory of its content: from conversations in green anarchy to emphasizing indigenous anarchy.