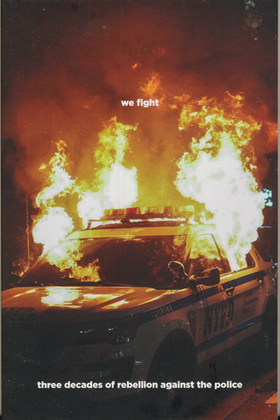 three decades of rebellion against the police

"Here, we have collected the voices of maybe two dozen people, most of them anonymous. Yet in the events they describe, we can see the agency of thousands who stood up to the police, who refused to permit them to divide and conquer us, to play the boot on the State's foot, that would crush us all into oblivion if we let it.
This is not just a protest against police brutality. It's not a gesture to let their masters know that we disapprove of how the police treat us. The police are brutality. We do not demand some kinder, gentler form of police. We aim to end the police, to make sure they are the last enforcement mechanism of the state."

Published by our good friends at Detritus Books, this is about 300 pages of stirring stories, quotes, and photos, organized chronologically and by resistance and response to specific police acts. Starting with Rodney King, moving to Cincinnati and Timothy Thomas, Oscar Grant in Oakland, Timothy Brenton, Maurice Clemmons and more in Seattle, Atlanta and Trayvon, Flatbush and Kimani, Durham and Chuy, Mike Brown in Ferguson, George Floyd in Minneapolis, and ending with Jacob Blake in Kenosha, these writings by a wide range of anarchists also work to humanize the icons who stand for themselves but also the thousands of less-known victims of police.