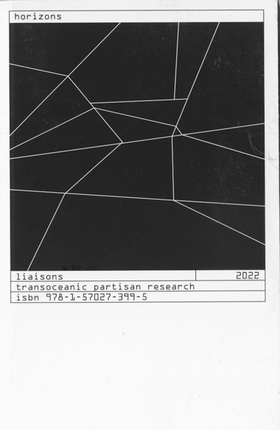 from Liaisons, transatlantic partisan research, published by Autonomedia. Produced in 2021, this is almost 400 pages of mostly unattributed pieces from Japan, Mexico, Italy, Sudan, the US, France, and Germany. We haven't finished reading this ourselves yet, but we appreciate the combination of humility and chutzpa (e.g. the combination of talking about planetary options while alluding more to questions than to answers). Is "planetary" the new internationalism? We will see...

Instead of offering a grand theory of revolution or the prospect of a different life, our wager has been much humbler: to cobble together--among the ruins of the revolutionary tradition--international fragments of research and experience that we hope shed a little light on the present and our ways of living in it. This necessarily takes on a planetary dimension--a good reminder for those of us in the United States--as any horizon of liberation on a national scale, if it ever existed, has long ago reached its end. We hope something in the present work reaches you, touches you, helps restore something of the vitality demanded by our time.

For added enjoyment, make a guessing game out of who wrote what.