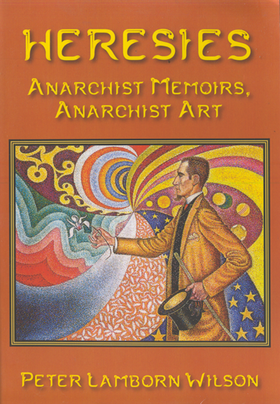 Before PLW died this year, we'd started working on a collection of essays about him, and also ordered more of his books from Autonomedia. Well, the latter are finally here, and this is one of them. Subtitled Anarchist Memoirs, Anarchist Art, this book is in two parts. The first is stories, reminiscences, and rants from the mid 1980s on, the second part "consists of essays on Symbolisme, alchemy and anarchism in the arts, with commentaries on William Morris, Walter Crane, Odilon Redon, Max Klinger, Stephane Mallarme, Paul Signac, [personal favorite - ed.] Felix Feneon, Rube Goldberg, and many others.

Some of the essays --
How I Became an Anarchist
Enemies of the Future
Fin-du-Monde
Utopian Maunderings
On Violence
On Hoodoo
A Theory of Everything
Difference
Tiny Anarchies
Living Under Demonic Power
The Strange Balloon: Anarchism and Symbolism
Marcel Duchamp, Max Stirner, Paracelsus, Rube Goldberg