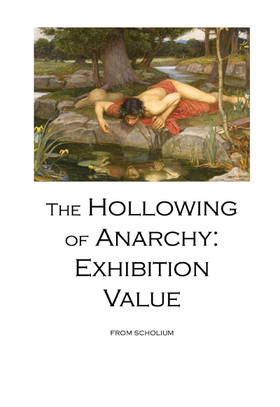 Based on the Benjamin article "The Work of Art in the Age of Mechanical Reproduction," and inspired by Byung-Chul Han's The Transparency Society and Society of the Spectacle, this is a thoughtful and interesting essay that speaks to the current reformist tendencies among many who call themselves anarchist.

The right-wing backlash that marks the contemporary political period provides further incentive for anarchy’s hollowing. With smackdowns between antifa and far-right street fighters on the horizon, those partaking on the antifa side are not going to come out victorious in one-on-one combat. Anarchists do not build a cult around images of strength the way the far right does, and we don’t have the tepid support of the police.
So, if said smackdowns are to be engaged in, antifa needs numbers. Thus, there is pressure to transgress societal values less, and to appear to embrace those that, superficially, we share with liberals. Opposition to race, gender, nationalism, and identity lose their sharpened edge and become the culturally-hegemonic common sense of being against racism, sexism, and Nazis. We end up appearing as the defenders of this society and its values, in opposition to the anti-establishment Nazis.